The Children's Home of Kingston

With courage, foresight, and remarkable determination, the institution we know as the Children's Home of Kingston was conceived and established by a small group of warm-hearted energetic women of Kingston, NY. In December of 1876, Miss Mary Isabella Forsyth met with her friends at the Supreme Court Chambers. They draw up the Articles of Incorporation for "The Industrial Home of the City of Kingston" in the City Hall with Judge Lawton. Its stated aim was "the temporary care and training of friendless, neglected or destitute children and to provide a home for respectable aged persons." The motto on the official seal was “TO SEEK AND SAVE.”

Originally there were twenty-two Board members consisting of Managers and Trustees and an Advisory Committee of fourteen. At the first meeting on December 26, 1876, officers were elected, the Constitution and By-Laws drawn up; and the City Alms House Managers met with the Board. Together they discussed the religious faith of the inmates, attendance at school, and funds to be paid by the City for each child. Subscription books were furnished to each Manager, who selected two solicitors from her own church to raise funds for the Home.

The first location of the Industrial Home was the Winne House on Maiden Lane opposite Academy Park. It was rented for $300.00 a year. In 1878 The Home changed its location to 87 Green Street, where the home of J. E. Ostrander was rented. A few years later they purchased a house at 353 Broadway.

Many applications were received for girls from The Industrial Home to be household helpers and for boys to be farm workers. These were seriously considered and discussed. Sometimes applications were accepted but often denied when the surroundings were considered an undesirable influence. When homes were accepted, various Managers visited the families to make sure that the arrangements were mutually satisfactory. In 1898 a monument was in Wiltwyck Cemetery in memory of the children from The Home who were buried there. 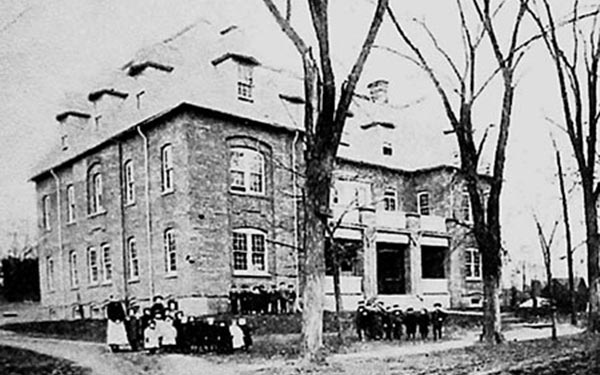 Beginning in 1880, many plans for the erection of a permanent building were investigated. Ultimately Miss Forsyth and her associates were rewarded for their untiring efforts. Because of them and the labors of the first Building Committee, composed of James G. Lindsley, Samuel D. Coykendall, Jacob H. Tremper and Reuben Bernard, the dream finally became a reality. The Industrial Home in its own building on East Chester Street was publicly opened on September 27, 1903, free from debt.

Final payment on a cottage apart from the main building where newcomers were received was made in 1908. This year also marked the beginning of the Endowment Fund. It was initiated by a gift of $2,000.00 from Mrs. W.M. Gokey, who was one of tile original founders. By 1912 the Endowment Fund had grown to over $5,000.00.

In 1911 an outbreak of erysipelas struck The Home, causing the death of one of the ladies caring for the sick children. The house was quarantined, and the boys playroom was turned into a hospital. As this disease abated, epidemics of chicken pox and whooping cough followed immediately. Four years later a typhoid fever epidemic caused another period of quarantine for the children and those caring for them.

Trustees John D. Schoonmaker and J. Graham Rose arranged for an extension to the ground in 1912. They helped to get the land in order. On the property they placed a summer-house, two large swings and a pathway through the grounds and gardening land.

Miss Mary Isabella Forsyth died in July of 1914, after a most phenomenally long and devoted period of service to The Home. She had been the President of the Board of Managers since its beginning and had been active for each of those thirty-eight years. 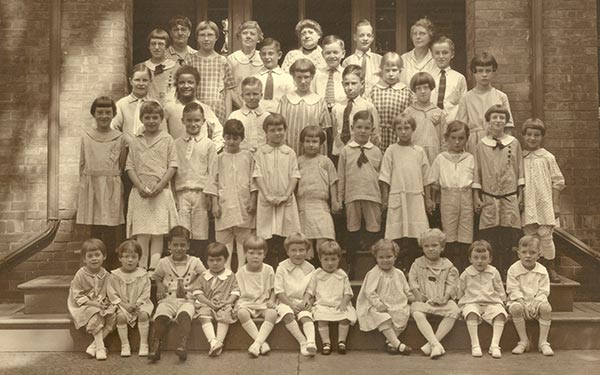 "Questions of policies and techniques had to be adjusted. Changes in ideas and methods have taken place in our way of living to bring a keener understanding of the emotional and physical needs to the child of today and to the many problems and perplexities created by this New Industrial Area.” Instead of orphans and paupers, most of the children were from broken homes with both parents living.

"In most cases there was insecurity at home, not always straight poverty but difficult living; friction between parents; inability to supply the most common needs for a fairly happy childhood."

"They had found difficulties in their home environments and they are finding even more difficulties in their new environment. While this struggle goes on these children have inner needs and demands not experienced by ordinary children. These needs must be care fully considered if we want normal development, and the progressive institution must offer treatment facilities which the old-fashioned temporary children's shelter never dreamed of."

This desire to go beyond their former goals in child-caring was further strengthened during the next decade. "We have become more sensitive to the maladjusted child and his social behavior. We are beginning to see a child as he really is, not as we think he should be."

During the years of World War II the children participated in air raid alarm practice. Each child took his specified part in the "Black-Out" and its preparation. Despite emergency rulings affecting supplies and equipment replacement, the Board members, Trustees, and Superintendent kept The Home running efficiently. This was possible with the help of its many old friends and contributors.

The Edward M. Stanbrough Fund was established in 1944 by the will of Miss Jane E. Stanbrough, a former school teacher, to honor the memory of her brother. This fund was to be used to further the education of young people from Kingston and vicinity who were in need of financial assistance. Its administration by the Board has continued through the years.

A program of summer activities was started and greatly enlarged at this time. Every child who was old enough went to the Y.M.C.A. Day Camp. This gave them a needed change of scene and the benefits of healthy active outdoor activities.

Problems of adequate staffing made 1945 a difficult year. Several members of The Home were called to the services and essential war work. There was a total of six people to care for every phase of running the Home. To cover expenses Board rates had to be raised from $6.00 to $7.50 per week as of January 1, 1946.

Discussion started on changing the name of the Industrial Home. A committee consisting of Mrs. Robert R. Rodie, Hrs. Howard A. Lewis and Mrs. Cornelius Treadwell was formed to choose a more suitable name for the institution. The first suggestion was "Highland House.” On December 2, 1946, after long consideration, the Board of Managers selected "The Children's Home of Kingston, New York." This was officially accepted and placed on file in the County Clerk's Office in May 1947.

It was decided that The 'Home' should go into an all boy program, and "Highclif” was taken over as a quarters for the junior boys. This building was enlarged and renovated, and house parents were hired to care for the boys. 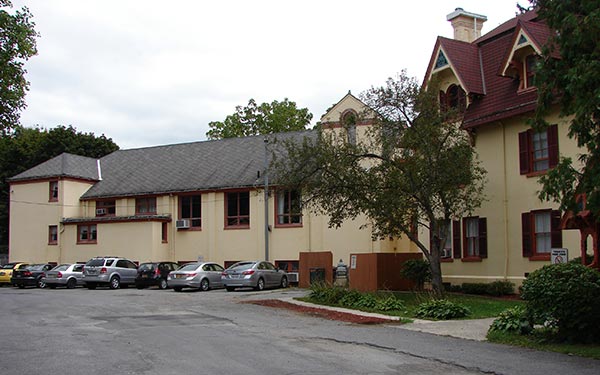 The new addition contained a fine large gymnasium, all the staff offices and a classroom for conducting ungraded schooling for those children unable to function successfully in the public school system. The teacher's salary was provided by the Stanbrough Fund.

In 1964 the Board of Managers began consultations with the Child Welfare League of America. Soon after the Home was accepted as an Associate Member of the League.

The summer of 1965, saw the beginning of a new administration under the guidance of the Child Welfare League of America. The Board of Managers became a Board of Directors and were thus freed from many of the managerial tasks of the past. Other changes were instituted in the utilization of space in the main building.

The Educational Program began to take on additional importance in the developing Treatment Program, and a second classroom was established in the main building. The support from the Stanbrough Committee was vital in the expansion of this program.

The Social Work Program originally discussed in 1957, was re-established in the summer of 1965. This marked the beginning of the Clinical Program and the start of the relationship with the Ulster County Mental Health Board.

And the rest, as they say, is history.